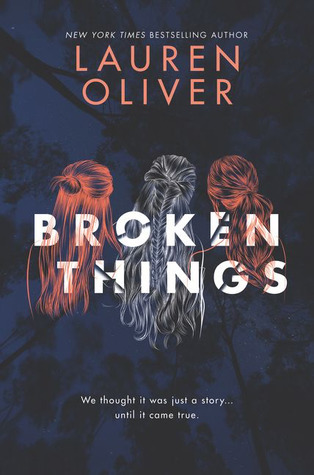 Broken Things came on my radar when I saw some fellow bloggers post favorable reviews. It’s  mystery/suspense/fiction meets fairy-tale. They are interwoven together. That sounded interesting to me. And the book definitely had a Special Topics in Calamity Physics feel to it and I loved that book.

I’d never heard of Lauren Oliver, perhaps because she writes YA fiction (and Broken Things is also YA), but I was surprised to see that she’s such a prolific writer. And when I visited her website and looked at her books, I did see that she wrote Before I Fall, which I haven’t read but I loved the movie, starring Zoey Deutsch (you know, Lorraine Baines daughter?!?).

She also has an adult novel, Rooms which came out in 2014 that I’m intrigued by as well. Has anyone reading this read that one?

It’s been five years since Summer Marks was brutally murdered in the woods.

Everyone thinks Mia and Brynn killed their best friend. That driven by their obsession with a novel called The Way into Lovelorn the three girls had imagined themselves into the magical world where their fantasies became twisted, even deadly.

The only thing is: they didn’t do it.

On the anniversary of Summer’s death, a seemingly insignificant discovery resurrects the mystery and pulls Mia and Brynn back together once again. But as the lines begin to blur between past and present and fiction and reality, the girls must confront what really happened in the woods all those years ago—no matter how monstrous.

Broken Things opens on Brynn detailing about five years earlier, she murdered her friend Summer along with her friend Mia and Summer’s boyfriend Owen. And I don’t think it’s too much of a spoiler–since it’s revealed on page 6–that the whole confession ends with another one, Brynn declaring “Never mind, either, that we didn’t do it.”

Five years later, child murderers Brynn, Mia and Owen, have all evaded serving real-time for the crime they were accused of. No one had been convicted and life has gone on for all of them. A stilted life as everyone around them still thinks they did it.

Switching back and forth between Mia and Brynn as narrators, the book also flip-flops between present day and five years earlier when the crime took place. At the time of the crime, all three girls were obsessed with the book, The Way into Lovelorn, a kind of horror fairy tale that is Summer’s only link to her mother. She girls wrote their own book, Return to Lovelorn, fan fiction, that describes Summer’s murder. Can you see why everyone thought they were guilty?

I really wanted to love Broken Things, I really did! And I think a lot of what made this one fall slightly flat for me is just that it is YA fiction.  It’s not written for adults, I’m not the demographic. Although I do (guiltily) love me some good YA now and then. It took me a really long time to get into this one and the two narrators  seemed so similar. I couldn’t tell their voices apart most of the time and would have to flip around to figure out which one was which.

I also didn’t feel that the excerpts from The Way into Lovelorn or Return to Lovelorn really enhanced the story in any way. I loved the concept of this whole horror fairy tale coming to life, but it didn’t quite work for me.

Sometimes when I review a book it’s just not good. I really don’t think that was the case here. It just didn’t speak to me. It’s like when you break up with someone and say, “It’s not you, it’s me!” I know a lot of people really loved this one it just wasn’t my cup of tea. That said though, I kind of want to check out some of Oliver’s other titles. I love finding a new-to-me author. Even if it’s YA.

Broken Things is out now. Get your copy now: