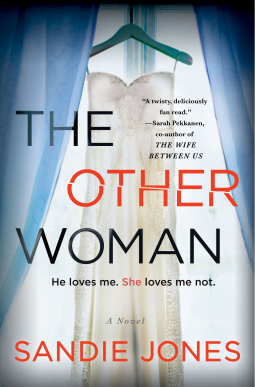 Today I am reviewing The Other Woman by Sandie Jones. When we think of the “other woman”, we think of an awful, conniving woman who is out to steal our man away. So what happens, when (in the case of this book), that “other woman” is the woman who had him first–his mother?

Of course that brings to mind Norman Bates and Psycho.

But even if we just look at everyday situations, the mother or mother-in-law is a woman who holds quite a bit of power over a relationship. If everything was sunshine and butterflies growing up, she has all the love and all the power. But even if it wasn’t, she still set a lot of gender norms and expectations for her son.

I hope someday I’ll be a good mother-in-law. But it might not be up to me. With boys we do so much for them. We feed them, shelter them, dress them, nag them. We probably baby them far more than we should. So what happens one days when our little boys find a girlfriend or a wife to do all those things for them.What does that loss of control do to a mom?

I mean, in this day and age, they should be doing these things for themselves. Maybe that should be the goal?

A deliciously disturbing, compulsively readable debut domestic suspense–prepare to meet The Other Woman: there’s nothing she won’t do to keep you away from her son …

Emily thinks Adam’s perfect; the man she thought she’d never meet. But lurking in the shadows is a rival; a woman who shares a deep bond with the man she loves.

Emily chose Adam, but she didn’t choose his mother Pammie. There’s nothing a mother wouldn’t do for her son, and now Emily is about to find out just how far Pammie will go to get what she wants: Emily gone forever.

The Other Woman is an addictive, fast-paced psychological thriller about the destructive relationship between Emily, her boyfriend Adam, and his manipulative mother Pammie.

When we first Emily, she doesn’t seem to have a ton of self-confidence. Sure, she has that self-deprecating ironic confidence that comes from being in your twenties, successful, and working your long way up the ladder. But she seems to view herself as average at best. Enter Adam.

He’s the perfect guy–or a good one anyways. Successful, confident, funny–a total package. The guy that every girl in her twenties that is actively dating wants to find. The total package. And she seems a little surprised when he is super into her, but she just goes with it. I mean, why not?

And everything is perfect until she meets his mother. Now this is where Jones really shines. She nails the Pammie character. Pammie is sweet and amazing to everyone who knows her–except to Emily. She is an evil genius to Emily. And no one can see it. And she makes me so angry and so frustrated. I mean, I love her as a character, but so glad she’s not my mother-in-law. I felt an overwhelming urge to punch Pammie throughout most of the book.

This book definitely didn’t feel like a psychological thriller to me at all. Even in the most subtle sense. But I did still really enjoy the book. Sandie Jones writes great characters. They are multi-dimensional and I found the relationships and personalities to be 100% genuine and believable as real human beings.

I can’t decide if this book would be a good one to read for someone who has MIL issues. It might feel a bit like therapy or it might send you over the top. But either way, it will be a good read!

Special thanks to Minotaur Books, St. Martin’s Press and Netgalley for the advanced e-galley in exchange for my honest review.

This one is out August 21! Get your copy.

4 thoughts on “The Other Woman by Sandie Jones, 4 Stars”