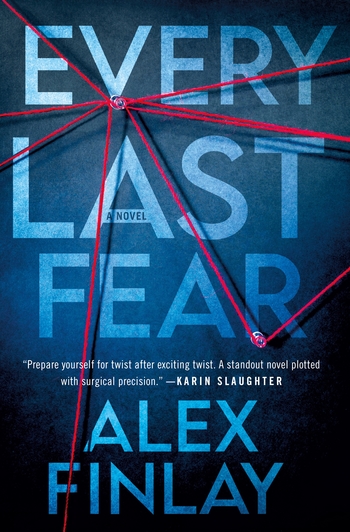 I remember hearing about a family a few years back who were on vacation and all died in their condo from gas poisoning. And I looked it up and this has got to be what was the inspiration for Finlay’s newest book, Every Last Fear. The real-life family, The Sharp Family from Iowa, were vacationing in Tulum, which is also where the family in the book was vacationing.

I remember hearing that story and it having an emotional impact on me, regardless of the fact that I don’t know the family. Vacations are just the best part of life (I may have an elevated view considering COVID cancelled mine last year), but they are so special. So a family spending the money to go on a really nice vacation to spend time together and meeting their demise because there was no carbon monoxide detector in their condo is such a tragic waste!

Of course, in Every Last Fear, it might not be so accidental. At the very least, the family is not quite so random.

In one of the year’s most anticipated debut psychological thrillers, a family made infamous by a true crime documentary is found dead, leaving their surviving son to uncover the truth about their final days.

“They found the bodies on a Tuesday.” So begins this twisty and breathtaking novel that traces the fate of the Pine family, a thriller that will both leave you on the edge of your seat and move you to tears.

After a late night of partying, NYU student Matt Pine returns to his dorm room to devastating news: nearly his entire family—his mom, his dad, his little brother and sister—have been found dead from an apparent gas leak while vacationing in Mexico. The local police claim it was an accident, but the FBI and State Department seem far less certain—and they won’t tell Matt why.

The tragedy makes headlines everywhere because this isn’t the first time the Pine family has been thrust into the media spotlight. Matt’s older brother, Danny—currently serving a life sentence for the murder of his teenage girlfriend Charlotte—was the subject of a viral true crime documentary suggesting that Danny was wrongfully convicted. Though the country has rallied behind Danny, Matt holds a secret about his brother that he’s never told anyone: the night Charlotte was killed Matt saw something that makes him believe his brother is guilty of the crime.

When Matt returns to his small hometown to bury his parents and siblings, he’s faced with a hostile community that was villainized by the documentary, a frenzied media, and memories he’d hoped to leave behind forever. Now, as the deaths in Mexico appear increasingly suspicious and connected to Danny’s case, Matt must unearth the truth behind the crime that sent his brother to prison—putting his own life in peril—and forcing him to confront his every last fear.

Told through multiple points-of-view and alternating between past and present, Alex Finlay’s Every Last Fear is not only a page-turning thriller, it’s also a poignant story about a family managing heartbreak and tragedy, and living through a fame they never wanted.

When Matt Pine finds out his family has died on vacation in Mexico, he’s devastated. And not just in the way that pretty much anyone would be. But even more so, because his brother has been wasting away in prison for 6 years, being found guilty of murdering his girlfriend back in their hometown in Nebraska where he was the star quarterback of the football team.

And this vacation didn’t exactly happen under normal circumstances. The Pine Family was all but broke, because their Dad had spent all his money trying to prove his oldest son’s innocence, and went to such extremes that his participation in a true crime documentary also got his fired from his job. So what where they doing on an expensive vacation to Tulum Mexico?

Not to mention the fact that Matt finds out about his family from the FBI, who are looking into the father’s old firm who apparently had been in cahoots with a Mexican cartel. The plot thickens. If the family’s death wasn’t just an accident, is it linked to a killer who doesn’t want to be revealed, or a gang who is owed something?

Every Last Fear is a wild ride. It’s a two-fer mystery as the reader tries to figure out who-dunnit in not just one, but two, possibly three crimes. We travel to Tulum and back, to a small-town in Nebraska and the Chicago suburbs.

I have to say that one thing bugged me. Finlay had the Pine family living in Naperville. Which is fine, except I feel like that’s a pretty specific setting. Now, full transparency, I am from there, but it also just has this way about it and this reputation that I know reaches farther than Illinois. And it was Naperville but only in name. Nothing about the story had anything to do with or mirrored actual Naperville. So that did bug me a big. Even the high school- they called it Naperville High School, which is not a thing. They have 5 high schools. But I’m sure that bugged only me:)

Still if you can look past that, or don’t care about that detail, it’s a fantastic thriller. I loved this one and really appreciated how different and multi-faceted the story was. Special thanks to Netgalley and St. Martin’s Press. This one is out March 2, 2021. Get your copy!