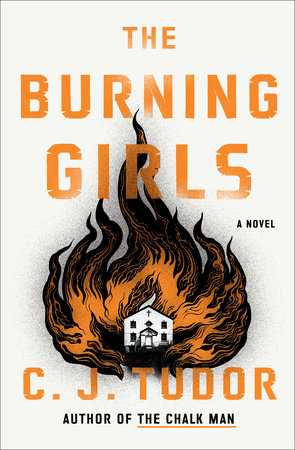 Another lazy Sunday, another snowy day. I’ve always loved a good snowy day. To snuggle under a blanket, drink coffee and read books. And on Sundays, it’s a bonus because I don’t feel the need to ditch my book for a workout. Ahh, rest day! I can hold down the couch like no other. My husband always jokes that I’m the dog’s favorite person because I’m simultaneously the most active and the laziest person in the house.

I finished up The Invisible Life of Addie LaRue this morning during my leisurely 3 hours sitting on the couch with the dog. And I’ll share my review soon! Because it was good (but really, did you expect anything less?) But today, I’m going to be reviewing The Burning Girls by C.J. Tudor, which I finished on last weekend’s reading binge.

I’ve really come to appreciate C.J. Tudor’s writing in the thriller genre. She’s a bit macabre and her books just feel different than your average thriller. Another writer that makes me feel that way? Gillian Flynn. A little bit gory, a little bit spooky, the tiniest bit shocking and super readable.

An unconventional vicar must exorcise the dark past of a remote village haunted by death and disappearances in this explosive and unsettling thriller from the acclaimed author of The Chalk Man.

A dark history lingers in Chapel Croft. Five hundred years ago, Protestant martyrs were betrayed—then burned. Thirty years ago, two teenage girls disappeared without a trace. And a few weeks ago, the vicar of the local parish hanged himself in the nave of the church.

Reverend Jack Brooks, a single parent with a fourteen-year-old daughter and a heavy conscience, arrives in the village hoping for a fresh start. Instead, Jack finds a town rife with conspiracies and secrets, and is greeted with a strange welcome package: an exorcism kit and a note that warns, “But there is nothing covered up that will not be revealed and hidden that will not be known.”

The more Jack and daughter, Flo, explore the town and get to know its strange denizens, the deeper they are drawn into the age-old rifts, mysteries, and suspicions. And when Flo begins to see specters of girls ablaze, it becomes apparent there are ghosts here that refuse to be laid to rest.

Uncovering the truth can be deadly in a village with a bloody past, where everyone has something to hide and no one trusts an outsider.

I’m a huge fan of anyone, fictional or real, who is an example of what faith can be. Jack is a female vicar, so already pushing the gender boundaries of her chosen profession. But she’s also messy, and realistic, and loving and real. And she’s a reverend. And she loves God, and she wants to help people. I love a character that shows what religion can and should be.

And that really has little to do with the actual plot of this book (well, maybe a bit), but Jack is a refreshing character. So when we can see what has been going on in the little town of Chapel Croft through her eyes, it makes it all that much more interesting.

There’s a legend in the town of the two burning girls, girls who were burnt at the stake for being witches back when the town was being founded a really long time ago. And sometimes, people see them. And when they appear, it’s legend that it is some type of warning. So there’s that. Then there are the two girls who disappeared 30 years ago, without a trace. And that’s not the least of it.

The Burning Girls has a certain Salem witch hunt feel. There’s the history, there are modern day mysteries, there are people living in the town who aren’t quite right, and there are the exorcisms, all in the middle of a quaint village. It’s a terrific read for anyone who loves a good thriller with a touch of ghosts and horror.

Special thanks to Netgalley and Ballantine Books for an advanced e-galley in exchange for my honest review. This one is out February 9! Get your copy: