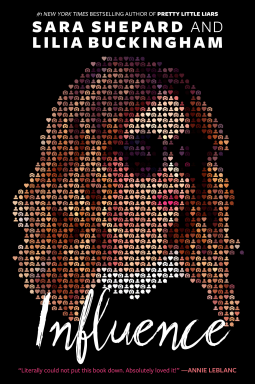 Can I start this post by saying that I am in no way the intended audience for Influence by Sara Shepard. I’m a grown ass woman who probably has no business reading YA books about social influencers.

But, Pretty Little Liars. And Gossip Girl. Nuf said? I actually attended a book party for Gossip Girl when I was in NYC for work once. And it was fabulous. And it filled my head with dreams of working in publishing in NYC, instead of Naperville, IL. And my future husband spilled a glass of red wine on the press kits (which were housed in glossy red folders). Yes, it was a long time ago.

Still, once in while, I like to feel young. And I tell myself that reading YA gives me the tiniest bit of insight into what my kids know about influencers and Tik Tok and all the fun thing. Maybe…

Get ready to delve into the world of teen influencers in this twisty mystery from the #1 New York Times bestselling author of PRETTY LITTLE LIARS Sara Shepard and sixteen-year-old actress and social media personality Lilia Buckingham.

After a video she makes goes viral, everyone knows Delilah Rollins. And now that she’s in LA, Delilah’s standing on the edge of something incredible. Everything is going to change. She has no idea how much.

Jasmine Walters-Diaz grew up in the spotlight. A child star turned media darling, the posts of her in her classic Lulu C. rainbow skirt practically break the Internet. But if the world knew who Jasmine really was, her perfect life? Canceled.

Fiona Jacobs is so funny–the kind of girl for whom a crowd parts–no wonder she’s always smiling! But on the inside? The girl’s a hot mess. And when someone comes out of the shadows with a secret from her past, it’s one that won’t just embarrass Fiona: it will ruin her.

Who wouldn’t want to be Scarlet Leigh? Just look at her Instagram. Scarlet isn’t just styled to perfection: she is perfection. Scarlet has a gorgeous, famous boyfriend named Jack and there’s a whole fanbase about their ship. To everyone watching online, their lives seem perfect . . . but are they really? The sun is hot in California . . . and someone’s going to get burned.

When we meet Delilah, she has just moved to LA and is kind of a social baby. People kind of know who she is (thanks to a video that went viral of her saving a dog from a burning house), but she’s so clueless about what she even needs to do to take her fifteen minutes of fame and translate it into a life as a top social media personality.

Still, she’s working on it. And two of the most famous influencers, Fiona and Jasmine, have taken her under their wing. She has potential sponsors coming out of the woodwork who want to work with her and she finds herself invited to all the top parties (even though no one even really wants to be there except the fans). But when she falls in love-on accident- with another influencer’s boyfriend, she is very close to getting shut down before she even gets going.

The first part of the book was entertaining enough, introducing this vapid, superficial world where image is the only thing that matters. But after a while, I was craving something. I needed something to happen. And then it did – literally 60% of the way through the book. Which seemed strange to me.

Then from there it just kind of went. And in the end, it felt like a scooby doo/afterschool special type of ending. But as I’ve mentioned earlier in this post, I am no way the intended audience for this book. And I can totally see it turning into something more. A CW show? A made for TV movie? We will see.

Buckingham and Shepard have created some colorful characters that remind me a lot of the real-life (or were they?) shenanigans on Laguna Beach. Teens and young adults with more fame than they know what to do with, and no talent to back it up. But that kind of makes them genius, doesn’t it?

Special thanks to Delacorte Press and Netgalley for the advanced e-galley in exchange for my honest review. I think one is best left to the age-appropriate YA readers. This one is out January 5, 2021. Pick up a copy for the teen reader in your life. They will eat it up!