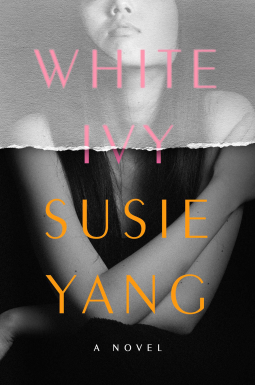 Once again, the book I’ve had for the longest in my Netgalley queue turns out to be an absolutely amazing read! What are the chances? Unfortunately, I can’t think of a single way to capitalize on this phenomenon as it really has nothing to do with me putting off reading it. Maybe I just have bad judgement.

There is something so intriguing about Chinese culture. I just find all the traditions interesting, along with the differences in culture (even in Chinese-American families) and the struggles that the first generation American children go through to “fit in” with American culture.

There’s just a certain mystique to Chinese culture that is so beautiful and mysterious. I’m not quite sure why.

But, back to the book. Glamour called White Ivy, “A truly addictive read,” and they hit it right on the mark. What’s crazy is that the author, Susie Yang, isn’t just a writer, she also holds a pharmacy doctorate degree from Rutgers, she launched a tech start-up in San Francisco and has taught 20,000 people how to code. What can’t she do?

Raised outside of Boston, Ivy’s immigrant grandmother relies on Ivy’s mild appearance for cover as she teaches her granddaughter how to pilfer items from yard sales and second-hand shops. Thieving allows Ivy to accumulate the trappings of a suburban teen—and, most importantly, to attract the attention of Gideon Speyer, the golden boy of a wealthy political family. But when Ivy’s mother discovers her trespasses, punishment is swift and Ivy is sent to China, and her dream instantly evaporates.

Years later, Ivy has grown into a poised yet restless young woman, haunted by her conflicting feelings about her upbringing and her family. Back in Boston, when Ivy bumps into Sylvia Speyer, Gideon’s sister, a reconnection with Gideon seems not only inevitable—it feels like fate.

Slowly, Ivy sinks her claws into Gideon and the entire Speyer clan by attending fancy dinners, and weekend getaways to the cape. But just as Ivy is about to have everything she’s ever wanted, a ghost from her past resurfaces, threatening the nearly perfect life she’s worked so hard to build.

Filled with surprising twists and offering sharp insights into the immigrant experience, White Ivy is both a love triangle and a coming-of-age story, as well as a glimpse into the dark side of a woman who yearns for success at any cost.

Ivy is a fantastic character. As a child she’s a squirrely misfit who learns how to gain things in life through stealing. Specially stealing and cheating at thrift shops and garage sales where everything is already ridiculously cheap.

Her grandma teaches her how to shoplift reasoning that Americans don’t see value and that it’s somehow owned to them that they do. But it sets a theme throughout Ivy’s life. That she deserves things, whether she earns them or not. And it really kind of goes against her culture, not willing to work for things. But she finds ways to skirt through life. She makes bad decisions, but none really catch up with her. She’s scrappy and smart. And doesn’t really give AF.

She meets Gideon in junior high and he is every bit a teenage dream. And he finally notices Ivy. Until her parents humiliate her in front of him, send her for China to the summer, and move while she’s gone.

A chance meeting years later, brings Gideon back into her life. And while a lot has changed and Ivy has grown up, a lot hasn’t changed. White Ivy is a fascinating book to read.

And I totally didn’t realize that it wasn’t just a book, but kind of a re-telling of a proverb. And if you really think about it, what does an ivy do? It clings to wood or stone, hiding the ruins of what it feeds upon.

White Ivy is a gem. And finding an amazing debut novel is just like finding a treasured jewel. I look forward to more from Susie Yang. Special thanks to Netgalley and Simon and Schuster for a free e-galley in exchange for my honest review. This one is out November 3. Get your copy: