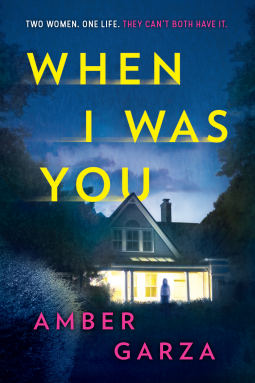 When I Was You was billed as You meets Fatal Attraction. Who can say no to that? And I could have sworn that I’ve read something I really liked by the author, Amber Garza, in the past. But I think I’m confusing her with a character named Amber in a book I read at some point. Book nerd problems.

It appears Garza is actually quite a prolific writer, but her main genre is romance. When I Was You appears to be her first thriller. And knowing that, wow, it’s a good one. I definitely look forward to more from her in this genre.

Romance has never been my thing, but I no judgement if you love them. My sophomore year in college, my Rhetoric T.A., Eric, a man who resembled a living porcelain doll, asked everyone in the class to buy and read a romance novel. It was actually a super fun assignment. Of course, I had to go all in. I picked a romance featuring a shirtless cowboy. And yes, the book was not amazing, but the discussion the class had after we all read ours, really was.

But I digress. I’m good at that. Here’s my review.

“A compulsive read about a friendship and maternal instincts gone awry, with a twist you won’t want to miss.” —Karen Cleveland, New York Times bestselling author of Need to Know

“Exhilarating, page-turning, shocking, this is one of those rare psychological thrillers that really is the whole package. An electric, raw, emotional story that will leave you breathless.” —Christina McDonald, USA Today bestselling author of The Night Olivia Fell

You meets Fatal Attraction in this up-all-night story of suspicion, obsession and motherhood.

It all begins on an ordinary fall morning, when Kelly Medina gets a call from her son’s pediatrician to confirm her upcoming “well-baby” appointment. It’s a cruel mistake; her son left for college a year ago, and Kelly’s never felt so alone. The receptionist quickly apologizes: there’s another mother in town named Kelly Medina, and she must have gotten their numbers switched.

For days, Kelly can’t stop thinking about the woman who shares her name. Lives in her same town. Has a son she can still hold, and her whole life ahead of her. She can’t help looking for her: at the grocery store, at the gym, on social media. When Kelly just happens to bump into the single mother outside that pediatrician’s office, it’s simple curiosity getting the better of her.

Their unlikely friendship brings Kelly a renewed sense of purpose—taking care of this young woman and her adorable baby boy. But that friendship quickly turns to obsession.

When we first meet the first Kelly Medina, it’s pretty clear she is unhinged. Who wouldn’t be? Her husband rents an apartment two hours away where he lives during the week and her only child is away at college. Kelly is all alone in her big house.

So when she finds out there is a another Kelly Medina in town, a younger version of herself complete with a baby boy, Kelly springs into action. She has to meet this woman. And when she does, she quickly inserts herself into the others Kelly’s life.

And it’s so creepy and cringey. It’s like watching a train wreck. But don’t worry, the worst is yet to come. It definitely brings You to mind, minus adorable Joe (is it unhealthy to think a serial killer is cute?). And perhaps Fatal Attraction although I’m thinking more Single White Female.

But When I Was You is one of those books that tells things from different viewpoints. Without giving too much away, it’s a fun one to watch unfold. And that’s all I’ll say. Lips zipped because this one is worth checking out and I don’t want to ruin it.

Special thanks to Mira Books and Netgalley for an advanced e-galley in exchange for my honest review. This one is out August 25. Preorder your copy!

One thought on “When I Was You, by Amber Garza, 4 Stars”