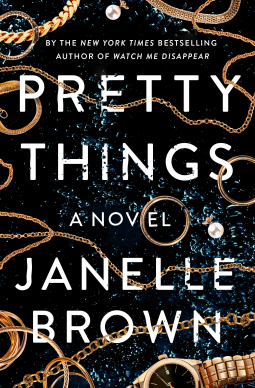 Do you remember all the trashy talk shows in the 90’s? It was exhausting. And also kind of amazing (as a teenager anyways) to watch people trash eachother on national television multiple times a day.

Oh boy! High school was such a messed up social hierarchy contest that means so much at the time, and not a thing the minute it’s over. And yes, some wrongs in high school are worth more than others, but I can’t imagine bringing a bully on live television to show off how amazing I am now. I mean, doesn’t that idea kind of cancel out any amazing qualities one may have built?

But I digress. That’s what the premise of Pretty Things made me think of at first. But it wasn’t quite that. And it was much better than an episode of Jerry Springer.

Nina once bought into the idea that her fancy liberal arts degree would lead to a fulfilling career. When that dream crashed, she turned to stealing from rich kids in L.A. alongside her wily Irish boyfriend, Lachlan. Nina learned from the best: Her mother was the original con artist, hustling to give her daughter a decent childhood despite their wayward life. But when her mom gets sick, Nina puts everything on the line to help her, even if it means running her most audacious, dangerous scam yet.

Vanessa is a privileged young heiress who wanted to make her mark in the world. Instead she becomes an Instagram influencer—traveling the globe, receiving free clothes and products, and posing for pictures in exotic locales. But behind the covetable façade is a life marked by tragedy. After a broken engagement, Vanessa retreats to her family’s sprawling mountain estate, Stonehaven: a mansion of dark secrets not just from Vanessa’s past, but from that of a lost and troubled girl named Nina.

Nina’s, Vanessa’s, and Lachlan’s paths collide here, on the cold shores of Lake Tahoe, where their intertwined lives give way to a winter of aspiration and desire, duplicity and revenge.

This dazzling, twisty, mesmerizing novel showcases acclaimed author Janelle Brown at her best, as two brilliant, damaged women try to survive the greatest game of deceit and destruction they will ever play.

Nina’s mom was always a con artist. Which made for an interesting upbringing in Las Vegas where she worked at a casino. There was that bright, shining moment in high school, when Nina and her mom moved to Tahoe, where Nina attended a private school and fell in love with Benny, a boy who was also a bit of an outcast, but from a rich family.

But, as with most of Nina’s life, that bright shining moment was cut short and she and her mom found themselves slinking back to Vegas. Fast forward maybe 10 years? Nina pulled herself up by her bootstraps to graduated from a reputable university and get a job. A low paying job. Because while still worth the hard work, college degrees are a dime a dozen.

When her mom gets sick, Nina returns home to help. And it isn’t long before she finds herself engulfed in her mother’s con world with her ruggedly handsome friend, Lachlan. So, while she escaped it once, it became her world as she struggles to pay her mother’s medical bills.

So, when a brilliant con plan has the potential to pay for a pricey treatment, and possibly avenge some of that hurt from Nina’s adolescence, she pounces on it. She and Lachlan enter the world of Tahoe as Ashley and Michael.

This one took me a while to get into, but once I was there, the pages starting flying by. The book is told from Nina and Vanessa’s point of view, and it’s interesting to see their different sides of the same scenes. I ended up loving this one. Check it out for sure!

Special thanks to Netgalley and Random House for an advanced e-galley in exchange for my honest review. This one is out April 21. Pre-order your copy.