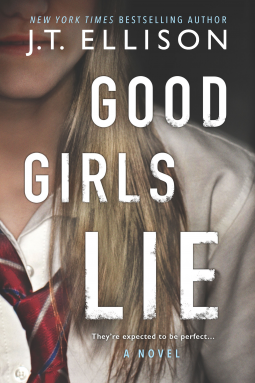 What is it about private schools? They carry such a mystery for those of us who are completely outside that world. I went to a public high school, so there was never any concern about being shipped off to boarding school. Still, they seem so elusive and sophisticated and spooky. Are real-life boarding schools as scary as they are portrayed in books?

Because really, I’ve never read a book about private boarding schools where there wasn’t some intense sisterhood bond that resulted in lies and murder or where there weren’t ghosts stalking the school’s population. Then again, I mostly read thrillers and suspense. Maybe that’s my problem.

As you may have already guessed, I’m reviewing a thriller today, Good Girls Lie, written by J.T Ellison.

Perched atop a hill in the tiny town of Marchburg, Virginia, The Goode School is a prestigious prep school known as a Silent Ivy. The boarding school of choice for daughters of the rich and influential, it accepts only the best and the brightest. Its elite status, long-held traditions and honor code are ideal for preparing exceptional young women for brilliant futures at Ivy League universities and beyond. But a stranger has come to Goode, and this ivy has turned poisonous.

In a world where appearances are everything, as long as students pretend to follow the rules, no one questions the cruelties of the secret societies or the dubious behavior of the privileged young women who expect to get away with murder. But when a popular student is found dead, the truth cannot be ignored. Rumors suggest she was struggling with a secret that drove her to suicide.

But look closely…because there are truths and there are lies, and then there is everything that really happened.

When we first meet Ash, she seems like a likeable girl just trying to survive after the sudden death of her parents. She has come over from England, partially because she is a gifted pianist and was given a scholarship -although her father was royalty and wealthy so she could have paid her way.

It was her parents’ wish she attend the school before their untimely deaths, and it seems she simply doesn’t know what else to do except travel to America to start over. She even goes by a different name in order to avoid the gossip mill when the other girls find out about her parents and her past.

She quickly starts to make friends and is solicited by the school’s allusive secret society. But as she struggles to “appear” normal on the outside, Ellison begins to provide snapshots into Ash’s real life and background. And there’s the small matter that there have other accidents and deaths and all roads lead back to Ash. Are that many coincidences possible?

Ellison spins a great tale full of the mystery and dark past of a girl’s private school and creates multi-dimensional characters who are hiding things from each other and the reader. I would have rated this one higher, but it did take a little while for me to really get into the story.

Special thanks to Netgalley and Mira for an advanced readers copy of this one. It releases December 30, 2019. Get your copy: