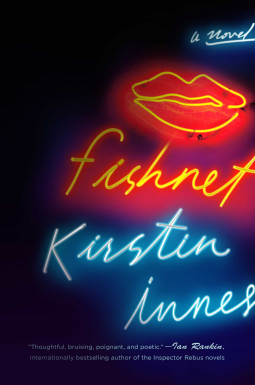 I picked up Fishnet by Kirsten Innes because it seemed different. And in a world of thrillers that often blend in with the one I read right before them, different is refreshing. It’s interesting though because I so often find myself reading books with similar themes back to back.

Earlier this month, I reviewed The Whisper Network. And while that is an entirely different story, it also tells the story of women who choose to unapologetically live their lives, their way. Society and gender boundaries be damned!

It’s a good month when I have the pleasure to read two such books in the same month written by equally strong and brave authors.

Rona Leonard was only twenty-years-old when she walked out of her sister Fiona’s flat and disappeared.

Six years later—worn down by a tedious job, childcare, and an aching absence in her life—Fiona’s mundane existence is blown apart by the revelation that Rona had been working as a prostitute before she vanished. Driven to discover the truth, Fiona embarks on an obsessive quest to investigate the sex industry that claimed her sister. However, as she is drawn into this complex world, Fiona finds herself seduced by the power it offers women in a society determined to see them only as victims.

In bold, unflinching prose, Fishnet offers a clear-eyed look at the lives of sex workers, questioning our perception of contemporary femininity and challenging assumptions about power, vulnerability, and choice.

Fiona is living in her sister Rona’s shadow. Truly. Ever since Rona disappeared, Fiona has been living with her parents, trying desperately to solve the mystery of where Rona went. She works in a boring clerical job in a crappy part of town, has no boyfriend or meaningful friendships. Her life has stalled out.

It isn’t until she finds out her sister was actually a sex worker that her life begins to take on meaning and become interesting. Her boring job is with a company trying to shut down a sex worker’s safe haven and she starts forming relationships with the women in order to find leads on what happened to her sister, and as she gets to know these strong unique women, she starts seeing past their profession.

I love the premise for this book and I think it’s definitely a strong debut from Kirstin Innes. I would have rated it slightly higher if I felt a stronger connection to Fiona. She was very lost earlier in the book and starts finding herself as time goes on. but I didn’t find it completely believable. It was also classified as a thriller, which it was not. Mystery sure. But the book didn’t really keep me on the edge of my seat.

Still, it’s a bold topic and it’s based on real-life relationships the author formed as a journalist over ten years ago. I could tell from reading the book that Innes was bringing respect to these women who are so often treated much different.

Special thanks to Gallery/Scout Books and Netgalley for an e-galley in exchange for my honest review. This one releases October 15, 2019. Get your copy: