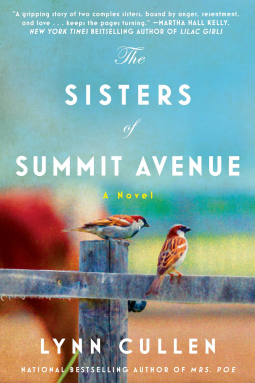 It’s no real secret to any of you–or anyone who has ever seen my nose in a book, I’m a big fan of suspense. But, every now and again, I’m up for a well-placed historical novel with all the feels. Think Kristen Hannah–The Nightingale, or The Great Alone, which feels slightly less historical because it’s recent history. But The Great Alone was just about my favorite book of 2018.

So when I saw The Sisters of Summit Avenue listed on Netgalley, it seemed like it might be a good change of pace. One thing I love about historical fiction. And, take this with a grain of salt, because it is still fiction. But I love that when we think of the past we think of people far different from ourselves and those we know now. But when you strip away all the modern comforts and technologies, people are people.

There are good people, there are rule breakers, and there are always those who are downright scandalous. They are the ones that make Downtown Abbey or Poldark delicious to watch. And yes, still fiction. But even in the Bible–as my pastor pointed out today–there are some people who clearly could have an HBO series on their lives.

So, here are my thoughts on The Sisters of Summit Avenue by Lynn Cullen.

Ruth has been single-handedly raising four young daughters and running her family’s Indiana farm for eight long years, ever since her husband, John, fell into a comatose state, infected by the infamous “sleeping sickness” devastating families across the country. If only she could trade places with her older sister, June, who is the envy of everyone she meets: blonde and beautiful, married to a wealthy doctor, living in a mansion in St. Paul. And June has a coveted job, too, as one of “the Bettys,” the perky recipe developers who populate General Mills’ famous Betty Crocker test kitchens. But these gilded trappings hide sorrows: she has borne no children. And the man she used to love more than anything belongs to Ruth.

When the two sisters reluctantly reunite after a long estrangement, June’s bitterness about her sister’s betrayal sets into motion a confrontation that’s been years in the making. And their mother, Dorothy, who’s brought the two of them together, has her own dark secrets, which might blow up the fragile peace she hopes to restore between her daughters.

An emotional journey of redemption, inner strength, and the ties that bind families together, for better or worse, The Sisters of Summit Avenue is a heartfelt love letter to mothers, daughters, and sisters everywhere.

When the book opens, we meet June. She’s a “Betty”. And not in the way they use it in Clueless, or maybe that’s exactly how they use it. But she actually works for the company that owned Betty Crocker, one of the many women who develop recipes and think of decorating and home ideas.

Its almost comical. Because you know then men at these companies could think of this stuff, but in that day and age, they had to bring in women to do the heavy lifting for them so they could have long martini lunches and crunch the numbers. You know, the important stuff. And this is an actual piece of American history. General Mills created Betty Crocker in 1921. If you want to read more about it, the article in Foodimentary lays it out well.

So once you’ve moved past that mind-blowing tidbit, it’s funny that June is seen as the perfect housewife and cook. But she is anything but because she doesn’t have any children and back then, it was a glaring discrepancy.

Then of course once we’ve met June, we meet her sister Ruth. Who is everything June isn’t. She isn’t posh and put together with a successful husband. She is a poor farmwife with 4 kids and a husband who is basically in a coma. And has been for 8 years.

And it keeps getting more and more interesting. Because there are family secrets and love triangles. These women are way more scandalous that you can imagine at the beginning of the book. It took me about a third of the book to really get into it, otherwise I would have given it a higher rating.

Still, it’s a great read. And anyone who grew up with a sister will identify with the sometimes complicated relationship that June and Ruth share. This one isn’t a summer read. It’s more of a curl up under a blanket with a warm cup of tea read. Perfect for fall! And it’s out September 10.

Special thanks to Netgalley and Gallery Books for an advanced egalley in exchange for my honest review. Get your copy!