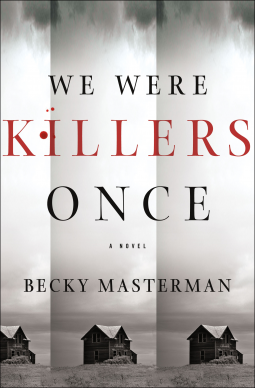 When I first saw the cover for We Were Killers Once, I was intrigued. And when I read the description, I was even more interested. I read Capote’s In Cold Blood years ago and while I can’t always say I enjoy the “classics,” I did love that one. Although I suppose it’s because I do enjoy a good book of true crime.

In Cold Blood is the ultimate horror story. It’s what keeps us all awake at night. If an innocent family of four could be savagely murdered in their home in a small town in Kansas in the 1950’s, aren’t we all at risk?

Sure, there were some elements of Capote’s classic tale that were somewhat fictionalized, but it still rang true. And it was still terrifying.

So how did Masterson’s historical fiction take on the real-life story rank?

In 1959, a family of four were brutally murdered in Holcomb, Kansas. Perry Smith and Dick Hickok were convicted and executed for the crime, and the murders and their investigation and solution became the subject of Truman Capote’s masterpiece, In Cold Blood. But what if there was a third killer, who remained unknown? What if there was another family, also murdered, who crossed paths with this band of killers, though their murder remains unsolved? And what if Dick Hickok left a written confession, explaining everything?

Retired FBI agent Brigid Quinn and her husband Carlo, a former priest and university professor, are trying to enjoy each other in this new stage in their lives. But a memento from Carlo’s days as a prison chaplain–a handwritten document hidden away undetected in a box of Carlo’s old things–has become a target for a man on the run from his past. Jerry Beaufort has just been released from prison after decades behind bars, and though he’d like to get on with living the rest of his life, he knows that somewhere there is a written record of the time he spent with two killers in 1959. Following the path of this letter will bring Jerry into contact with the last person he’ll see as a threat: Brigid Quinn.

What if Perry Smith and Dick Hickok had an accomplice? What if they weren’t the only ones who murdered the Clutter family on that cold November night in 1959? What if another family was murdered in the same style just months later in Florida? This the scenario that Becky Masterman explores in her new work of fiction, We Were Killers Once.

It’s an interesting theory. And even if the book is fiction, the murder of The Walker Family in December 1959 in Florida, is in fact, very true. Which is eerie. And Smith and Hickok were suspects in that case, although it was never solved.

Masterman takes all these details and spins a new story, a different take that offers a “what if” scenario to the horrifying murders. This part of the story is executed very effectively, in my opinion. I enjoyed the backstory about how Perry, Dick and Jerry met and how everything played out.

I haven’t read the rest of the Brigid Quinn series, but for me it was really random having such an interesting back story with real historical significance at the center of a fourth book in a running series. If the whole series was built around fictionalizing famous true crimes it would be one thing, but it appears this is the only such book.

I just wasn’t as interested in Brigid and Carlo and all the everyday workings of their lives. Because I was interested specifically in this story and not in the series. Am I making any sense?

Anyhow, I’m sure that current fans of the series will love this one, but overall it fell slightly flat for me. Special thanks to St. Martin’s Press and Netgalley for an advanced e-galley in exchange for my honest review. This one is out June 4! Get your copy:

One thought on “We Were Killers Once by Becky Masterman, 3 Stars”