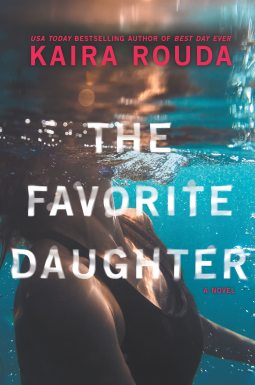 Narcissists are so fascinating, really. We just love to hate them. Especially from afar. Because if you actually have to deal with one on a regular basis, it is exhausting and frustrating. I picked up The Favorite Daughter by Kaira Rouda because I loved Best Day Ever, just the ramblings of a crazed narcissist. They are ineffable!

In her afterword, Rouda addresses the fact that she is so fascinated by narcissists that she has now written two books with one at the center. She writes that some estimate nearly 10% of the population are narcissists and our obsession with ourselves and social media and “selfies” are only feeding that population.

“Everything they show to the world is carefully calculated to portray perfection, even in their marriages, even when their lives may be falling apart. Narcissists suffer from a self-esteem problem coupled with low empathy.” (taken from The Favorite Daughter by Kaira Rouda).

Know anyone like that? Do you feel an overwhelming desire for someone to put that crazy person in their place? Just me? Anyways, on to the review!

Jane Harris lives in a sparkling home in an oceanfront gated community in Orange County. It’s a place that seems too beautiful to be touched by sadness. But exactly one year ago, Jane’s oldest daughter, Mary, died in a tragic accident and Jane has been grief-stricken ever since. Lost in a haze of antidepressants, she’s barely even left the house. Now that’s all about to change.

It’s time for Jane to reclaim her life and her family. Jane’s husband, David, has planned a memorial service for Mary and three days later, their youngest daughter, Betsy, graduates high school. Yet as Jane reemerges into the world, it’s clear her family has changed without her. Her husband has been working long days—and nights—at the office. Her daughter seems distant, even secretive. And her beloved Mary was always such a good girl—dutiful and loving. But does someone know more about Mary, and about her last day, than they’ve revealed?

The bonds between mothers and daughters, and husbands and wives should never be broken. But you never know how far someone will go to keep a family together…

The book opens on the first day of the rest of Jane’s life. She has suffered a crippling blow, her golden child, her light, died in a horrible accident a year ago. And now. after 12 months of severe depression, sleeping, not caring about a thing in the world, Jane has decided it is time to reclaim her life. Poor Jane.

Over the past year, her husband and caretaker, David, has grown weary. And her remaining daughter, Betsy, has grown distant and possesses that dreaded teenage quality–sarcasm and snark. It appears that when Mary died, the perfect, happy family died with her. Jane is desperate to reclaim that dynamic.

As these books go (and predictably so if you read Best Day Ever), things are not quite as  they seem and to call Jane an unreliable narrator would be the understatement of the year. Still, it’s hard to know who to trust and what to believe.

I definitely enjoyed this book–Rouda really nails what a narcissist is and their baffling behavior. And of course, the most disturbing part–their belief that they are always in the right and that they are a victim of other’s doing things to sabotage them. As if. These people are train wrecks. And infuriating. And it’s impossible to look away as much as you may dislike them.

But I did have some criticisms. To me Jane and Paul Strom (the narcissistic character in Best Day Ever) are so similar, it started to get a little tired for me about halfway through the book. And having read her last book, made the story and outcome all a little too predictable for me.

I’m not sure what would have differentiated it more for me. While different genders and in different situations, both Jane and Paul seemed to be attractive people who were once loveable and likeable until the people around them had just had enough and saw them for what they really are. And their tones were just so similar.

At the end of the book, in the afterword, the author addresses this personality disorder–narcissism. And explains a bit why she is so fascinated with it and how she now sees them everywhere. So I understand why it has had such an impact on the stories she tells. I am looking forward to more books from Rouda, maybe a new spin or personality disorder will be featured next time.

Special thanks to Graydon House Books and Netgalley for an advanced e-galley in exchange for my honest review.

One thought on “The Favorite Daughter by Kaira Rouda, 3.5 Stars”