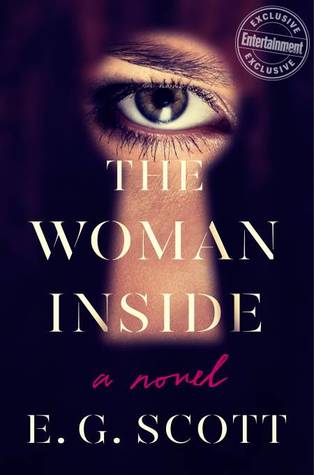 I’m always so intrigued by two authors that write a book together. Maybe it’s because I’ve always been terrible at working in groups? I still remember back to elementary school when we would be randomly assigned to groups and told there had to be a “secretary.” Guess who always got picked?

And no matter what, even though it was supposed to be easier in a group, it was always much worse than doing a project independently. Although now that I’m thinking about it, maybe it wasn’t supposed to be easier. Maybe it was teaching us to compromise and work as a team. It’s like a glass just shattered. That clever teacher! But whatever, it still sucked.

E.G. Scott is a pseudonym for two writers, Elizabeth Keenan and Greg Wands. Apparently they have been friends for years and have collaborated on short stories, screenplays, you name it. The Woman Inside is their first published work. And they are working on another one. So, was it good?

Rebecca didn’t know love was possible until she met Paul, a successful, charismatic, married man with a past as dark as her own. Their pain drew them together with an irresistible magnetism; they sensed that they were each other’s ideal (and perhaps only) match.

But twenty years later, Paul and Rebecca are drowning as the damage and secrets that ignited their love begin to consume their marriage. Paul is cheating on Rebecca, and his affair gets messy fast. His mistress is stalking them with growing audacity when Rebecca discovers Paul’s elaborate plan to build a new life without her. And though Rebecca is spiraling into an opiate addiction, it doesn’t stop her from coming up with a devious plot of her own, and this one could end absolutely everything.

What follows is an unpredictable and stylish game of cat and mouse—a shocking tale of unfaithfulness and unreliability that will keep you racing until the final twist and make you wonder how well you really know your spouse.

This one got great reviews, Entertainment Weekly ran an incredible review, and this one is even slated to become a TV series with the same production company that made Sharp Objects, my latest obsession.

Like many thrillers, we open on the final scene of the book. Then we cut to Rebecca’s life as a successful, although declining pharmaceutical sales girl. The main problem? She’s getting a bit too old in a industry crowded with attractive young women, and she’s getting a little bit too into her product as well. Problems #1 and #2.

Rebecca figures, no problem, who cares. Her and her husband Paul have been working like slaves for close to 18 years and maniacly building their savings account. Except when she checks, the money isn’t there. Problem #3.

Rebecca starts questioning their marriage and things escalate from there. We flip flop between Rebecca and Paul and slowly start to learn what has really been going on in their marriage. Or have we? This one is full of twists and turns, and per the usual, we might think we know what’s going on, but we probably don’t.

I wanted to like this book more. All the elements were there, and I did like it. What kept the book from blowing me away is that it’s billed as for fans of The Wife Between Us. For me? It was almost too similar. I guess it’s hard to stay fresh in a super-saturated thriller market.

I also found myself getting confused a few times as to what was going on or the timeline and had to flip back to figure it out. The story just didn’t hold my attention as much as I would have liked it to.

Still, I’m excited about the prospect of The Woman Inside becoming a TV show. I think all the elements are there for a super binge-worthy show. This one is out now! Get your copy.