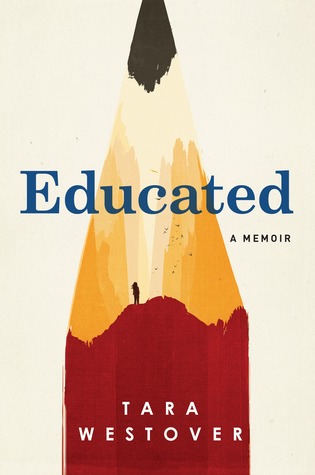 Educated is a #1 New York Times Bestseller (for many, many weeks), a Goodreads 2018 Reader’s Choice Winner, one of Barack Obama’s favorite books of the year, a finalist for the National Book Critic’s Circle First Book Award…and the list goes on!

I’m not always super pumped to dig into a book that everyone loves. Because I’m always worried it won’t live up to the hype. Did it? Read on!

Tara Westover was 17 the first time she set foot in a classroom. Born to survivalists in the mountains of Idaho, she prepared for the end of the world by stockpiling home-canned peaches and sleeping with her “head-for-the-hills bag”. In the summer she stewed herbs for her mother, a midwife and healer, and in the winter she salvaged in her father’s junkyard.

Her father forbade hospitals, so Tara never saw a doctor or nurse. Gashes and concussions, even burns from explosions, were all treated at home with herbalism. The family was so isolated from mainstream society that there was no one to ensure the children received an education and no one to intervene when one of Tara’s older brothers became violent.

Then, lacking any formal education, Tara began to educate herself. She taught herself enough mathematics and grammar to be admitted to Brigham Young University, where she studied history, learning for the first time about important world events like the Holocaust and the civil rights movement. Her quest for knowledge transformed her, taking her over oceans and across continents, to Harvard and to Cambridge. Only then would she wonder if she’d traveled too far, if there was still a way home.

Educated is an account of the struggle for self-invention. It is a tale of fierce family loyalty and of the grief that comes with severing the closest of ties. With the acute insight that distinguishes all great writers, Westover has crafted a universal coming-of-age story that gets to the heart of what an education is and what it offers: the perspective to see one’s life through new eyes and the will to change it.

As far as I could tell, Educated by Tara Westover is the new Glass Castle. And there’s nothing wrong with that. They are both outstanding books. And to compare them probably isn’t fair seeing as how both are memoirs, written by the women who lived the stories. And it’s not like their parents set out to have similar type stories.

What does it say about us Americans that we are so fascinated by reading true-life stories of people who had a crazy, dysfunctional and abusive upbringing? It’s definitely the train-wreck effect. It’s horrible and we can’t imagine it..and we can’t look away, not even for a minute.

It’s probably that we all had traumatic childhoods. Even if they were perfectly normal 100% all-American childhoods. Things happened. We were embarrassed, bullied, scorned and betrayed. It’s kind of just part of growing up. So to read a story of someone who truly had it bad, it probably makes us feel better.

Educated was an extremely well-written book, which that in of itself when you read Tara’s story is an amazing accomplishment. I definitely couldn’t identify with Tara and her decisions as she came from such an isolated world. But she writes with a voice that is completely relatable. So I saw her throughout the book as a peer, but one who has kicked and fighted her way to normalcy.

I read it in about two sittings and couldn’t put it down. It was that good. But for some reason, I really liked it, but I didn’t love it. But I can’t put my finger on why. It was a great book, but it didn’t blow me away. There was nothing completely different or unique about it for me. And yes, I’m pretty sure I’m in the minority.