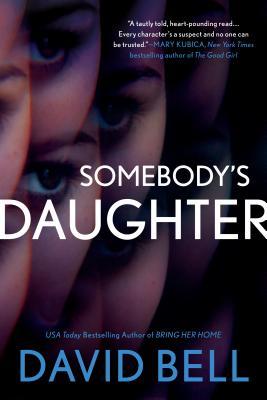 I have to admit, I had never read a book by David Bell prior to reading Somebody’s Daughter, his new book releasing July 10, 2018. But when I visited his website, I definitely added a couple of titles to my TBR list.

From what I can gather, his first book, Cemetery Girl (great title BTW, don’t you think?) released in 2011 and was a PW and Indiebound best-seller, a Target emerging authors selection and won an award.  Actually, almost all of his books have been Target emerging authors selections, which makes me question my true dedication to Target. I mean, I’m there all the time, but how have I been missing these books for years? Maybe it’s my other love affair with the library…

Anyhow, I want to check out Cemetery Girl for sure and see where I go from there. Have you read David Bell? Can you recommend any favorites? The synopses of his books sound so intriguing!

When Michael Frazier’s ex-wife, Erica, unexpectedly shows up on his doorstep, she drops a bombshell that threatens to rip his family apart: Her ten-year-old daughter is missing–and Michael is the father. Unsure whether this is the truth but unwilling to leave the girl’s fate to chance, Michael has no choice but to follow the elusive trail of the child he has always wanted but never knew he had.

After Michael departs, his wife, Angela, learns shocking news about Erica and fears for the safety of both her husband and the endangered girl. When a stranger, a man who claims a connection to Erica and her missing daughter, knocks on the door, Angela is drawn out into the night–and deep into the tangled web of Michael’s past….

Over the course of one night, lies that span a decade come bubbling to the surface, putting Michael, his wife, and his whole family in jeopardy. And as the window for a little girl’s safe return closes, Michael will have to decide who can be trusted and who is hiding the truth…

Somebody’s Daughter is a fast-paced mystery/thriller that plays out in one crazy night. We’ve all had those nights right? Okay, maybe not just like this, but a night where so many things happen and there are so many twists and turns that the day before seems like a lifetime ago?

The book opens on Michael and Angela, a fairly typical suburban couple. They’ve just finished dinner together, wine glasses still half-full on the table, and a promise hanging in the air of retreating to the bedroom when clean-up is complete…. when the doorbell rings.  And it’s Michael’s ex-wife. And she tells him that their 10-year-old daughter, who he doesn’t know about, has gone missing.

Wow!  I can’t even imagine being Angela in that moment.

Bell spins a interesting story, that takes through  a life-changing childhood tragedy in Michael’s past, his tumultuous relationship with his first wife, Erica and the jealousy and unrealized dreams that can hide beneath even the healthiest of relationships.

I really did enjoy this book. Although it does all unfold in one night, Bell includes enough flashbacks and jumps around a bit in time to keep the story from being too linear. The one character that was a bit of a problem for me was Erica’s ex-boyfriend. I didn’t find him to be completely believable, however part of that is that I don’t feel his true motivations were revealed. He was a bit unhinged and I’m not sure why anyone would’ve acted that way in the same situation.

That said, if you enjoy a good mystery, check this one out. It will release July 10, although to me it seems less like a beach read, and more like a book to read on a balmy summer evening with a good glass of red.

Special thanks to Berkeley Publishing Group and Netgalley for an advanced e-galley in exchange for my honest review.