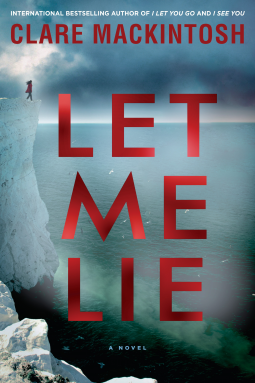 The first time I picked up Clare Mackintosh’s first book, I Let You Go, I read the first chapter, and put it down. Nope! It  starts out with a small boy getting killed in a hit and run. And with 3 small boys of my own, it just wasn’t a plot I could stomach.

Then a friend of mine said it was one of the best books she had ever read and I hemmed and hawed, but decided to give it another try. And it was a sad start and that details remains heartbreaking through the book. But I pushed through, and guess what? It was amazing, I’m glad I gave it another chance.

The police say it was suicide.
Anna says it was murder.
They’re both wrong.

One year ago, Caroline Johnson chose to end her life brutally: a shocking suicide planned to match that of her husband just months before. Their daughter, Anna, has struggled to come to terms with their loss ever since.

Now with a young baby of her own, Anna misses her mother more than ever and starts to question her parents’ deaths. But by digging up their past, she’ll put her future in danger. Sometimes it’s safer to let things lie…

The stunning, twisty new psychological thriller from number one bestseller Clare Mackintosh, author of I Let You Go and I See You.

The book opens on Anna, a young mom who is still struggling with her parents’ suicides a year before. Both of them (7 months apart) threw themselves off Beachy Head, a notorious cliff, into high tide. Not only is she grief stricken, but she struggles with feelings of betrayal and abandonment because before their deaths, her parents were her best friends.

She starts receiving ominous notes and threats and realizes that maybe, just maybe, there is more to her parents’ deaths than suicide. That’s where the story really gets going.

From the beginning, MacKintosh makes the reader wonder, who is sending the threats. Everyone is a suspect. Anna’s live-in boyfriend Mark (and father of her child) started out as her grief therapist. After one appointment he told her he couldn’t treat her and asked her on a date. So that’s a little shady.

Uncle Billy, who was Anna’s father’s partner in a family owned car dealership always lived in her father’s shadow and something is just off about him. Even the friendly next door neighbor, Robert, an aging bachelor could be a suspect. Apparently he wanted to build an addition on his house that would shade Anna’s garden.

I enjoyed the book, but never warmed up to Anna. In fact, my favorite character was little old Murray, a retired cop who is the only one who believes Anna and agrees to look into her parent’s deaths. Murray is a sweet old guy who has done nothing for himself his whole life and everything for others, especially his mentally ill wife Sarah whom he is caretaker of and dotes on constantly.

The book consists of three parts. And it’s constructed so that the reality and circumstances in each part is drastically different from the others. It was an enjoyable read for me. I did find the details in the final part of the book were a bit rushed. I had to go back and re-read a couple of passages in order to understand exactly what was going on.

Overall I did not feel that Let Me Lie was as strong as her first book, I Let You Go, but it was still a strong showing. I appreciated the plot twists and the end will for sure send shivers up your spine.

Thanks to Netgalley and Berkeley Publishing Group for an e-galley in exchange for my honest review. The book releases March 13, 2018.