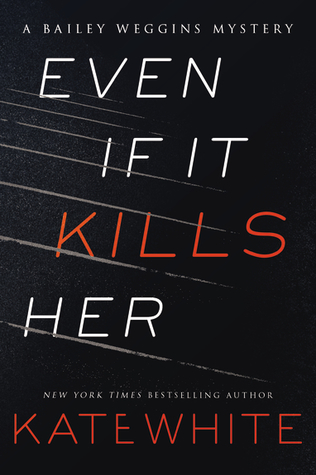 The word of the day today is cozy. I’m reviewing a perfectly cozy mystery and I have the most amazing smelling soup simmering on my the stove top!

How good does this recipe sound? Ham Bone Soup with carrots, onion, celery, kale, cabbage and beans. Oh and did I mention bacon? Because BACON. For me, there is really no better feeling than sitting in a clean house feeling cozy, wearing my MukLuks and having something yummy simmer all day on the stove top.

I’ve provided a link to the recipe below. It’s from NY Times Cooking, which charges a subscription now. But it might be the best money you spend all year. Everything I make is ah-mazing. And they will give you a 30 day trial. While you are on the site, grab the Chicken Shawarma recipe too. You’re welcome.

And now, for the book, Even if it Kills Her by Kate White.

Bailey Weggins’ great new friend in college, Jillian Lowe, had everything going for her. Pretty, popular, and whip-smart, she lit up any room that she walked into. All of that dramatically changed during her sophomore year, when a neighbor became unhinged and murdered her family. Jillian immediately left school, and ever since, Bailey has felt guilty for not staying in closer contact and being a greater support to her friend.

Now, sixteen years later, Bailey is shocked to see Jillian at her book event, and even more stunned when her still-gorgeous friend approaches her with a case. The man accused of murdering her family is on the brink of being cleared of the crime through new DNA evidence. With the real killer walking free, Jillian is desperate for Bailey’s help to identify him and allow her the closure she yearns for.

As the two women return to Jillian’s childhood town to investigate, it doesn’t take long for their sleuthing to cause shock waves. Someone starts watching their every move. As they uncover deeply guarded secrets, so shocking that they make Jillian rethink her entire relationship to her family, Bailey and Jillian find themselves in great peril. They must decide just how much they’re willing to risk to finally discover the truth about the Lowe family’s murder.

I really enjoyed reading this one. Kate White has definitely been growing on me lately and it’s exciting because I still have so many of her titles to read. Case in point, this is the first book I’ve read in the Bailey Weggins series, and I’m so excited to check out the rest of the series.

Even if it Kills Her is was an easy weekend read. It reminded me a bit of Mary Higgins Clark, like early Mary Higgins Clark that I would read as a teenager in the 90’s (and even then I think some of it was 10 years old). But cozy like an old comfortable shirt, with just enough who-dunn-it to keep the story going. Likeable characters who might be slightly stereotypical, but who cares? Compelling plot and good solid villains who keep you guessing.

Even If It Kills Her opens on the reunion of Bailey and Jillian, an old friend from college. The two had lost touch after Jillian’s family was murdered and Bailey always felt guilty for not supporting her friend or not knowing what type of support to offer at the time. Partly out of guilt, and partly to possibly provide a new book topic, Bailey agrees to help Jillian investigate the murders after new evidence has come to light, possibly clearing the man convicted of the murder.

The story flows at a nice click with Bailey and her old friend, Jillian, finding themselves in more and more danger as the story progresses. The book is a page-turner, and while I wouldn’t recommend it as a top read for people who like their suspense twisty and extreme, it’s a great read for those who are accustomed to more traditional mysteries.