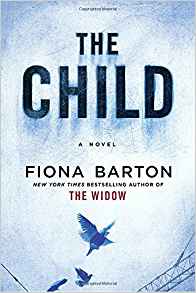 The Child by Fiona Barton was one of my top five most anticipated titles this summer. And it’s not just me. The book was named a TIME “Top Ten” Summer Thriller and June 2017 Library Reads Selection in addition to receiving starred reviews from both Publishers Weekly and Library Journal.

Add those accolades to the fact that I loved her first book, The Widow (February 2016, Berkley), and I had a strong feeling that Barton would not disappoint with her newest book.

I read this book in one sitting. Okay, maybe I got up for a drink of water or a cuppa (I’m not sure if the book specifically used that term, but Barton, being from Cambridge, uses other British slang.) But this book was so good that I could barely put it down.

As an old house is demolished in a gentrifying section of London, a workman discovers a tiny skeleton, buried for years. For journalist Kate Waters, it’s a story that deserves attention. She cobbles together a piece for her newspaper, but at a loss for answers, she can only pose a question: Who is the Building Site Baby?
As Kate investigates, she unearths connections to a crime that rocked the city decades earlier: A newborn baby was stolen from the maternity ward in a local hospital and was never found. Her heartbroken parents were left devastated by the loss.

But there is more to the story, and Kate is drawn—house by house—into the pasts of the people who once lived in this neighborhood that has given up its greatest mystery. And she soon finds herself the keeper of unexpected secrets that erupt in the lives of three women—and torn between what she can and cannot tell…

If you’ve read The Widow, you’ll recognize Kate Waters, one of the main characters in The Child.   This might be a preamble to a series, but for now from all I can tell, these books stand alone.

Sometimes I have issue with books in a series, in that over time the writing and stories themselves can seem formulaic. However, Barton’s writing is anything but. Her stories are meaty and the characters are very well-developed. I suspect this comes from Barton’s years as a reporter. If Kate became the main character in a series, I might be okay with that just this one time.

Kate’s voice is just one of the four main characters we get to know through their first person perspectives. The others are Jude, Angela and Emma. When I first started reading the book, the characters seemed so different I didn’t know how their stories would come together in the end. Their narratives around the Building Site Baby spanned several decades and at times were at odds with each other. It made the book incredibly compelling.

About halfway through the book, it seemed like the book was coming to an end. The plot points were tied up in a nice bow. Except I still had 150 pages left in the book. It was fun knowing that things were not as they seemed to the characters in the book.

I can’t say I didn’t see the “twist” coming. However, just because I thought I had figured it out, doesn’t mean it was over. Reading and waiting for the characters to put the pieces together was interesting in itself and kept the pages turning.

I found The Child to be a worthy entry in the psychological suspense genre. By the end of the book, I felt like I knew the characters personally, which raised the stakes as the story played out.

The Child by Fiona Barton

5 thoughts on “The Child by Fiona Barton”